Caring in COVID: Duncan’s kisses over the wall 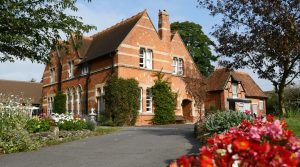 Every day during the COVID-19 lockdown, Duncan Mountjoy went for a 5.5 km walk.

It was always the same route passing Framland, the Pilgrims’ Friend Society care home in Wantage where his wife Lynne is living with severe dementia. Before lockdown Duncan had spent most of each day with her, but during lockdown he could only go as far as the wall, where he blew a kiss over it to Lynne in her bedroom.

“Emotionally, it helps me feel that I’m near her. And I can wave through the window,” he said.

Last August, Duncan and Lynne had been married for 49 years. They have two children, Laura (39) who was born with cerebral palsy and now lives in a care home, and Andrew (38).

Duncan said, “It’s known that the strain of raising a child with a disability can cause couples to break up, but Lynne managed brilliantly, and we’ve always been happily married.”

An early symptom of Lynne’s dementia was that she sometimes forgot Laura’s breakfast before taking her to the Day Centre. There were other minor issues, but Duncan said, “In 2015 you wouldn’t know that she had Alzheimer’s. She could go out and about, was walking and talking. When the decline came, it came swiftly.”

Lynne was diagnosed with Alzheimer’s disease in February 2016, two days before Duncan’s retirement. But it wasn’t until a holiday in Malta in September 2017 that he noticed the disease progressing, when Lynne began to mumble to herself, and it developed quite fast from there.

The tipping point in his caring for her came in March 2018 when she fell downstairs and was badly bruised. A friend who has worked in care homes advised him that it was time for residential care, and Lynne went into Framland in July 2018.

Duncan added, “We all handle things in our own way. I was an IT director with a large company and am used to working under pressure. My coping mechanism involves having routine and structure in my life. I used to swim five days a week and now I use an exercise bike in the afternoon.

“It’s the little things that make me feel connected to her still. Her picture on my phone. And the stuff that she has closeted here that I know well. I gave away some of her clothes that were new, but I’ve kept the others. Having Lynne’s stuff, the smell of her on her clothes, it’s all part of my coping.”

Since the easing of visiting restrictions Duncan is able to book ‘window visits’, but more than anything he is looking forward to hugging his wife again.

A big factor in his adjusting to lockdown is that he knows that she is being looked after lovingly and well. He said, “Everyone who’s visited Lynne, they’ve all said the same thing about Framland – that it is so caring and has an aura about it.”

Greensleeves Care named among the top care groups in England